Proper valuation and due diligence is essential to a successful investment strategy.  We thought it would be helpful to share our insights on how best to mitigate some of the risks associated with making bank portfolio acquisitions in a rapidly changing market – and perhaps provoke some thought and discussion along the way.  That is why Summer Street Advisors is sponsoring a series of articles examining various aspects of underwriting and valuation. 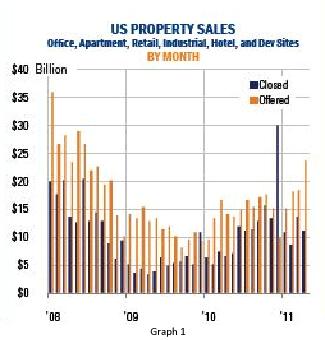 The Commercial Mortgage Backed Securities (CMBS) market is back!  Is that a good thing?  How should investors approach CMBS this time around?

The investors themselves may have changed a bit since the last go around; life companies used to be the big buyers of senior CMBS securities but the money markets are doing the driving now.  “B” piece investors are pairing up with mezzanine investors who are qualified to own and operate assets, or entering joint ventures with strong REITs.  Whichever way investors come to the market, with $30 Billion of new originations predicted for 2011 (See Graph 1), there should be ample opportunity for solid investments in the recovery.  But how can the new “B” piece buyers be certain about what they are getting into?  Has CMBS really learned the lessons of the past?  Or are we destined to repeat our mistakes?

After three hard years of frozen capital markets, for commercial real estate investors, owners and operators gladly welcome the return of the CMBS market.  CMBS issuance, which hit a high in 2007

of $230 Billion, collapsed to only $3 Billion by 2009.  In 2011, the capital has come back from every source, and transactions have started to build momentum.  According to Real Capital Analytics, transactions exceeded $30 Billion in the first quarter of 2011, surpassing first quarter 2010 levels.  An additional $11 Billion in transactions were reported in the month of April.  Bank and insurance company debt accounts for about two-thirds of that activity.  With capitalization rates settling into the low end of their range, commercial real estate is starting to catch its breath (See Graph 2).

But at the same time, fundamentals are stubbornly weak (especially true in non-core markets), absorption rates are bad, job creation is painfully low and there are still all those pesky defaults hanging over our heads.  According to a special report titled U.S. CMBS 2010 Loan Default Study which was issued by Fitch Ratings in May of this year, cumulative defaults of CMBS conduit fixed

rate loans reached 10.60% ($57.58 Billion) by the end of 2010 (See Graph 3).  Despite a slight slowing of default rates in recent quarters, “Fitch expects the cumulative default rate will exceed 12% by the end of 2011.”  And yet, despite the very recent scars, investors are getting back into the water and deals are getting done.  Reports abound of CMBS having learned its lessons, implementing stronger underwriting standards and putting the excesses of past years behind us.  But those reports may be a bit premature.  According to Jack Mullen, CEO of Summer Street Advisors, “the competition for core product has pushed CMBS to stretch again.  There’s plenty of talk about getting more coverage and taking on less leverage – ideally investors want 50% of CMBS deals to be in core markets – but that’s not what we are seeing.  By necessity, originators are funding transactions in non-core markets.  Insurance companies, pension funds, foreign capital and REITs are so competitive for product that it is pushing CMBS out of core once again.”

Mullen’s concerns are well founded.  In a recent report by Standard & Poor’s (S&P) it was noted that the U.S. CMBS market has already experienced, “a somewhat swift evolution between late 2009 and early 2011, as single-borrower transactions gave way to a market characterized by relatively larger, more complex multi-borrower deals.”  Some structural features have already loosened and certain property valuations may be overly optimistic.  According to S&P credit analyst James Manzi, “We continue to see instances where we believe that valuations are questionable, especially within the larger loans for certain property types, particularly office and hotel, in primary markets.  This is probably attributable to the fact that lending is very competitive in these types of markets, where insurance companies, pension funds, foreign investors, and REITs could be bidding alongside CMBS issuers.”

Bob Farina, a frequent consultant for “B” piece investors and former CMBS originator agrees that careful due diligence is required.  “You are not buying an insurance level bond when you buy CMBS.  By definition, CMBS has to go a little farther on proceeds, on structure, on market, on underwriting, or on execution risk than insurance company debt.

Therefore, it’s essential to understand what’s inside the individual deals.  There is more conservatism today generally and more cash in the deals, but when there is execution risk, there has to be more structure baked into the loans to account for that risk.  In effect, quite often we are exchanging leverage for other risk.  An example might be an interest-only 10 year deal in a tertiary market – but with only a 50% loan-to-value.  The deals are not cookie-cutter, but that’s not to say that they are bad deals.  There is rollover risk, there is market risk, but with a combination of careful structuring, as well as a thoughtful investment approach, these can be good deals.”

Mullen added, “It may be better structured, there may be better amortization, and maybe better performance – but the question continues to be how much will leverage creep up?  How much will appraisals creep away from reality?  How soon before CMBS doesn’t look as good as it should?  There’s no question in my mind that in order to avoid the mistakes of the past, “B” piece investors will have to look a lot closer than before.  They need to put people on the ground to examine the individual assets in the portfolio – not just take the ratings on faith.”

That need to look closely may drive a tendency towards larger deals in CMBS today than in years past.  According to Farina, “B piece buyers have to look closely at the product, but B piece buyers have limited resources.  This is all driving a trend towards bigger and lumpier securitization.  At the same time, smart investors will bring teams of underwriters in to perform the required due diligence.”

Mullen added, “as long as the “B” piece investors continue to pay close attention at the asset level, the worst excesses of CMBS are likely to be avoided.  It’s imperative, however, that they hold on to a high level of skepticism.  Appraisals, for example are already starting to get more aggressive.  We’re seeing a 30% differential in some cases between what we see as value and what the appraiser reports.  CMBS is an essential component of a healthy commercial real estate sector and there will continue to be good deals for “B” piece buyers, but in-depth and critical due diligence is a requirement for any investor, now more than ever.”

CMBS 2.0 will continue to evolve as the recovery continues, but the competitive factors that drove CMBS up the risk curve still exist.  Tough loans will be made and it is up to the investors to understand where the risks actually are – and how best to mitigate and profit from them.