Proper valuation and due diligence is essential to a successful investment strategy.  We thought it would be helpful to share our insights on how best to mitigate some of the risks associated with making bank portfolio acquisitions in a rapidly changing market – and perhaps provoke some thought and discussion along the way.  That is why Summer Street Advisors is sponsoring a series of articles examining various aspects of underwriting and valuation.

As commercial real estate enters the second half of 2011, perhaps somewhat oppressed by fears of European debt contagion, the US government’s games of partisan “chicken” over debt limits, and slow recovery of fundamental demand, it is difficult to determine what it will take to thrive in or even survive this “recovery”. Core markets and gateway cities have experienced enthusiastic and competitive bidding over the past 18 months, and stabilized assets are reaching pre-recession pricing – despite anemic occupancy growth and a recent report from the Bureau of Labor Statistics pointing to a small rise in the unemployment rate to 9.2% (See Chart 1).

On the other hand, value-add investments such as – development, repositioning, and non-core markets – seem scarce.  Banks remain reluctant to lend; their balance sheets are still laden with plenty of troubled assets, thus leverage continues to remain low.  Life companies and pension funds might be satisfied with low leverage and small yields on stabilized product, but the balance of the market needs a little more in their juice box.

Is there any hope for the “business plan” investor?  Who else besides large institutions can succeed in this “new normal” of the slow recovery?

One area of brightness has been the return of Commercial Mortgage Backed Securities (CMBS).  In hibernation for a couple of years, originators came roaring back this year.  But as we have seen, change is inevitable and CMBS investors appear to be putting the brakes on. After $20.8 billion of U.S. securitizations with rapidly compressing spreads, a recent decrease of investor demand has pushed the spreads paid for the bonds back up.   As reported by Commercial Mortgage Alert on July 22nd, “The spread on the benchmark triple-A class of an offering led by Wells Fargo and RBS priced yesterday at 170 basis points over swaps.  That was 35 basis points wider than initial price talk and 40 basis points wider than the comparable class of the previous transaction.”

With a good amount of loans currently warehoused, waiting for securitization and presumably losing value every time the spread widens, CMBS originators are understandably losing their unbridled enthusiasm of previous months.  Citadel Securities, after predicting at the beginning of the year that they would originate $600 million of CMBS debt in 2001, recently announced that its lending program is on hold.  And they are not alone.  By no means does this mean the nascent CMBS recovery is over.  According to Commercial Mortgage Alert, although the heat seems to be turned down a bit, $12.4 billion of securitizations are still scheduled before year end.

Is this cause to be alarmed?  Or is it simply a rational correction caused by an inexorably slow recovery?  There are plenty of reasons to be concerned.  Even if one discounts European insolvency or an unthinkable US government default, the slow rate of recovery and an abundance of distressed assets in the system would give even the most fearless of investors reason to pause. 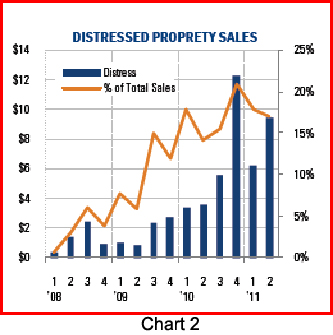 Real Capital Analytics reports that despite the disposition of $15.6 billion in distressed commercial real estate in the first half of 2011, outstanding distressed assets still total a whopping $180.4 billion (See Chart 2). New investments in the second quarter were double that of a year before at $55.6 billion, but most deals, excepting multi-family transactions, were confined to the top 10 markets.  Despite a steady inflation rate reported recently as 3.6% and continued historic low interest rates, there is little room for error in this market and rashness will likely be punished.

Bidding in core markets on stabilized assets has pushed pricing to the point that, according to Jack Mullen, Managing Partner of Summer Street Advisors, “The economics of recent trades doesn’t quite make sense at the level they are trading.”  Is it any wonder that CMBS investors have pulled back the reigns on originators?  In order to compete with institutional money, CMBS began to push their underwriting standards again and was even starting to work with property outside of core and gateway markets.  This correction may simply be a reminder to everyone engaged on any new deal, in this market, that nothing can be taken for granted.

According to Mullen, “This market is priced so tightly right now that there is less room for mistakes – and 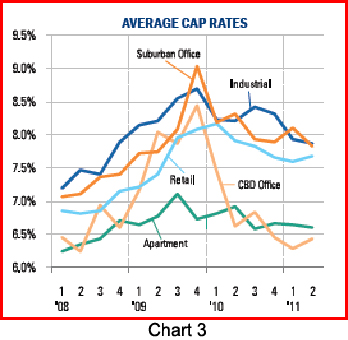 we can’t rely on a surge in employment growth to make up for any miscalculations. Class A tenant demand may be changing fundamentally – in office, retail, even industrial – how and where they use the space, what their demand is and how it works with their changing businesses is evolving (See Chart 3).  Yesterday’s trophy asset might be closer to extinction than anyone realizes.  That’s why gateway cities and other core markets are the only “safe” plays right now.  Tenants will put up with a slightly obsolescent building in New York City or Washington D.C. – and demand promises to keep those fundamentals strong.  In a secondary market, however, obsolescence is more of a threat.”

“In this kind of environment, knowledge, fundamentals, and strong business plans are more important than ever.”  Mullen points out.  The opportunities are there, but they need to be understood, as there is little to no margin for error.  Now that banks have raised more capital and values have started to stabilize and recover, they are stepping up their methodical clearance of troubled assets.  Jack continued, “This is a time for the specialist:  those who know enough about the markets, about the product type and about the business plans will find the opportunities.  Those who rely on pure capital muscle may be disappointed.”

On the other hand, the specialists are starting to get busy.  “Some are finding off-market deals, putting some money in, making capital improvements and then achieving improved occupancy and NOI as a result.  But they must really know what they are doing to succeed.  Institutions and the smaller players have to make sure they run a thorough underwriting process.   They need to really understand the deal, the risks, and the market and have to be good at the old-fashioned task of due diligence and asset management.”

The “new normal” of today’s commercial real estate market has very little wiggle room. For now, at least, those with the know-how have an advantage over the merely fortunate.